OmniSphero comprises a classical watershed algorithm to identify nuclei and to obtain information like position of the centroid of the nucleus on the image, nucleus area and intensity. The coordinates of the nuclei centroids are later used to associate a certain nucleus with a cell type (e.g. neurons). Additionally OmniSphero is able to import coordinates of nuclei from other software and to use for analyzing other endpoints such as neuronal identification or radial migration distance. In the case of neuronal identification this allows OmniSphero to perform a one by one comparison of identified nuclei positions associated to neurons between its own algorithms and algorithms of other software. 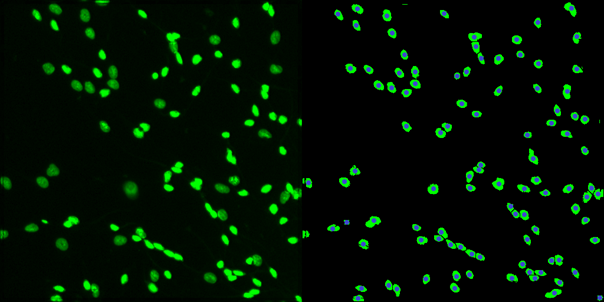 Figure 3: The left image shows an image from the nucleus channel (Hoechst stained nuclei, represented in green). The image is thresholded converted to a binary image and consequently a watershed algorithm is used to segment overlapping nuclei. Finally coordinates of centroids of identified nuclei are safed and can be displayed as a blue points cloud.

OmniSphero provides the user with a manual counting tool, to manually quantify neurons. This counting tool, saves all coordinates of the user defined neurons by mapping the clicking position to the closest surrounding nucleus. 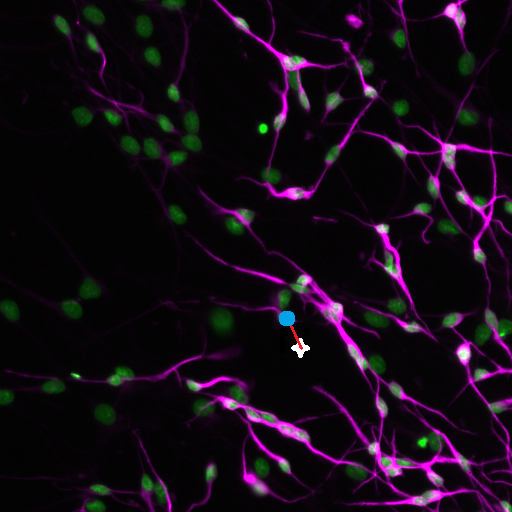 Figure 4: The user clicked position is shown as a white cross and is automatically mapped to the closest nuclei (blue dot)

OmniSphero comprises a self-developed algorithm called ‘Neuronal Tracer’ to quantify neurons in a heterogeneous cell population with varying cell densities. Most software requires the user to adjust multiple parameters on several sample images to optimize shape recognition, which results in a time consuming optimization procedure. Therefore, we implemented a new concept in ‘OmniSphero’, in which the user defines a neuron by manual assignment rather than by defining an object over parameter settings using the manual counting tool described above. Consequently, the program optimizes automatically all parameters to fulfill a user-defined maximal false positive (FP)-rate. 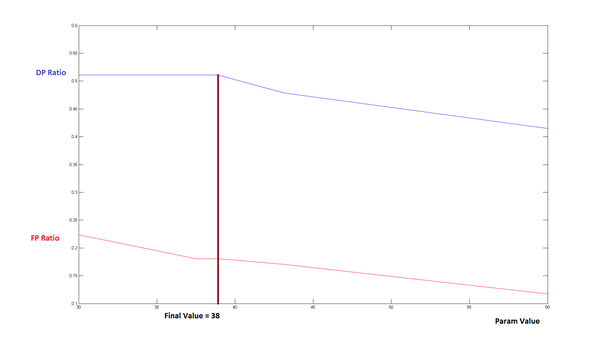 Figure 5: Optimization of one parameter within in the multiparameter analysis (here minimal skeleton length in pixel). The parameter is iterated until the best ratio between true positives (Detection power (DP)) and false positives (False positive (FP)-rate) is achieved, without extending the FP-rate above the maximal user defined value.

Results can be plotted as dose response curves to study the dose dependent effect of a substance on neuronal differentiation. Additionally coordinates of neurons obtained by other software can be imported into OmniSphero and DP and FP-rates can be analogous obtained by comparing them to the manually identified coordinates

Figure 6: Comparison of different automated methods in terms of accuracy and precision to identify neurons. In the left image dose response curves are shown in red blue and magenta for automated methods and in black for the manual evaluation as gold standard. Additionally the influence on viability is shown in grey. The middle and right image show the DP and FP-values for the corresponding algorithms.

With the latest version of OmniSphero, machine learning has been integrated. As such, nuclei can now automatically be preprocessed for two different machine learning models to classify each nucleus based on its morphological context as Oligodendrocyte and Neuron.

These models were trained and evaluated on image data previously obtained and annotated using OmniSphero. With this integration, evaluation speed has been increased and workflows automated further.
The integration of CNN models has been thoroughly established in, and is accessible directly from within OmniSphero. Potential models can be directly provided with preprocessed training data generated in a high throughput fashon. Compatible deep learning model candidates and their corresponding nuclei predictions can also be evaluated and their accuracy measured from within OmniSphero. 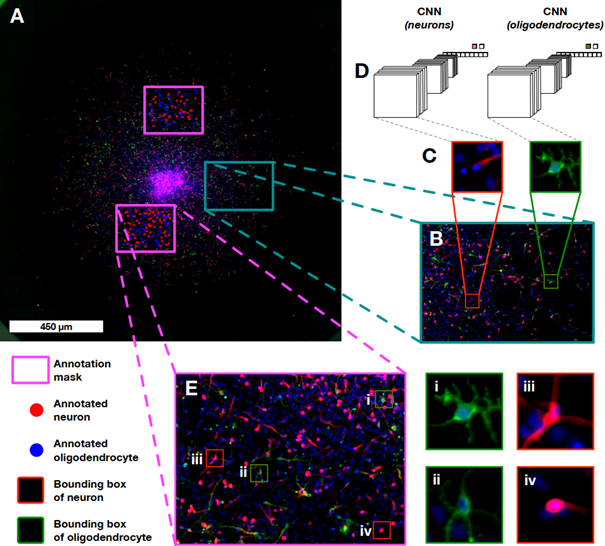 Figure 7: hNPCwere treated as described in Section2.1.Pseudo-colored composite mages were created by overlapping the Hoechst33258 (nuclei, blue),TUBB3 (neurites, red) and O4 (oligodendrocytes, green) antibody stainings. For every nucleus within a ROI contained in the neurosphere image (A) contained within the migration area, a 64x64 pixel tile is created with the corresponding nucleus at the center. (B) shows two examples, representing eurites (left) and oligodendrocytes (right). Every tile (C) has the unused color channel removed and a manual color adjustment is applied to each.(D) shows both tiles being loaded into the corresponding CNN. The CNNs were trained based on annotated subregions throughout a large number of wells, as exemplified in (E), where also four annotated cells are highlighted. 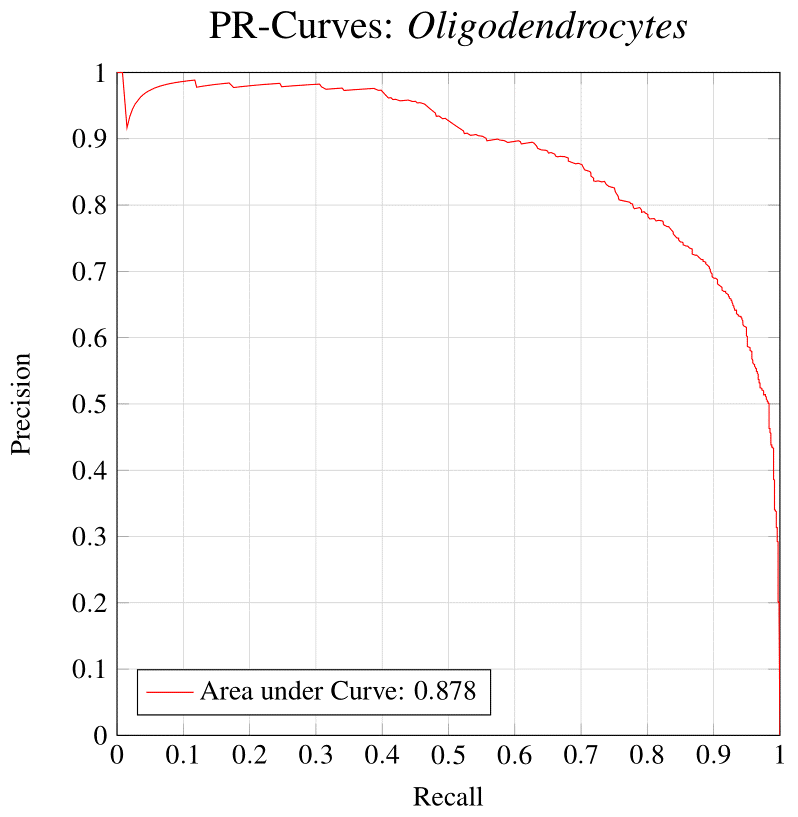 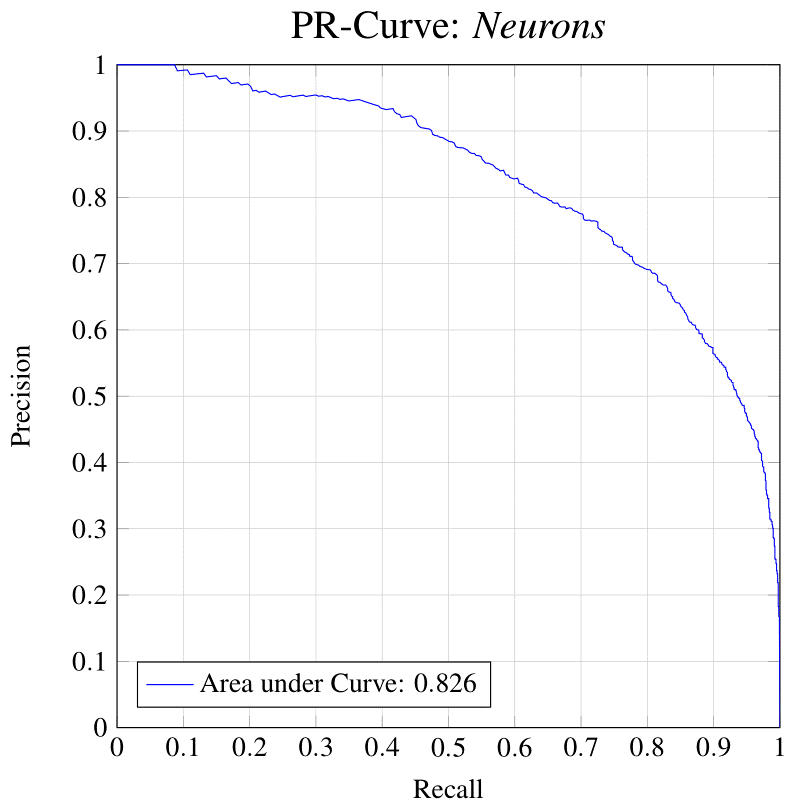 Figure 8: Prescision-Recall curves of the models used for nucleus classification.

Within the users interface of OmniSphero it is also possible to judge the quality of an automated evaluation by visualizing the coordinates of identified neurons on the overview image.

Figure 7: The left image shows the point cloud of all identified neurons of an automated evaluation. Within the user interface it is possible to zoom into certain regions to judge how accurate the neuronal identification performed.

It is also possible to display the coordinates of two algorithms or of one algorithm and a manual evaluation at the same time in different colors.

Figure 10: The left image shows positions of falsely identified neurons (red dots) on the overview image. The right image is a close up of a small extract showing several neurons which were identified by the algorithm (red dots), but not by the manual evaluation.

This enables the user to identify limitations of certain algorithms or helps to further improve their software.

OmniSphero enables the user to measure neurite area, neurite length, and number of branching points of either the entire neuron population or of only clearly separated neurite areas consisting of only one or two neurons.

Figure 13: Endpoints of neuronal morphology which can be assessed by Omnisphero. The green ellipses repsresend the neuron cell bodies. From the border of the cell somas, the neurite length, neurite area and existing branching points were evaluated.

The advantage of using only clearly separated areas consisting of one or two neurons circumvents a possible overlap of neurites present in big neurite areas.

OBEN
We use cookies on our website to give you the most relevant experience by remembering your preferences and repeat visits. By clicking “Accept All”, you consent to the use of ALL the cookies. However, you may visit "Cookie Settings" to provide a controlled consent.
Cookie SettingsAccept All
Manage consent

This website uses cookies to improve your experience while you navigate through the website. Out of these, the cookies that are categorized as necessary are stored on your browser as they are essential for the working of basic functionalities of the website. We also use third-party cookies that help us analyze and understand how you use this website. These cookies will be stored in your browser only with your consent. You also have the option to opt-out of these cookies. But opting out of some of these cookies may affect your browsing experience.
Necessary immer aktiv
Necessary cookies are absolutely essential for the website to function properly. These cookies ensure basic functionalities and security features of the website, anonymously.
Functional
Functional cookies help to perform certain functionalities like sharing the content of the website on social media platforms, collect feedbacks, and other third-party features.
Performance
Performance cookies are used to understand and analyze the key performance indexes of the website which helps in delivering a better user experience for the visitors.
Analytics
Analytical cookies are used to understand how visitors interact with the website. These cookies help provide information on metrics the number of visitors, bounce rate, traffic source, etc.
Advertisement
Advertisement cookies are used to provide visitors with relevant ads and marketing campaigns. These cookies track visitors across websites and collect information to provide customized ads.
Others
Other uncategorized cookies are those that are being analyzed and have not been classified into a category as yet.
SPEICHERN & AKZEPTIEREN