Neurodevelopmental toxicants are a serious risk for society, making regulatory testing for chemicals indispensable. Testing according to the current regulatory guidelines employing animal experiments is time- and cost intensive. For a more resource-effective way of developmental neurotoxicity (DNT) testing we established the human ‘Neurosphere Assay’, which is based on three dimensional (3D) neural progenitor cell (NPC) clusters. This system is able to mimic basic processes of brain development: Proliferation, differentiation, migration and apoptosis. Upon withdrawal of growth factors and in presence of an extracellular matrix (ECM), NPCs start to radially migrate out of the sphere-core and differentiate into neurons, oligodendrocytes and astrocytes maintaining cell-cell and cell-ECM interactions. In immunostained samples different cell types can be quantified and their morphology can be studied using high content image analyses (HCA).

However, safety and efficacy testing of chemicals with 3D neurospheres by employing high content image analyses (HCA) requires advanced scanning and evaluation processes due to characteristic features of the cultures: 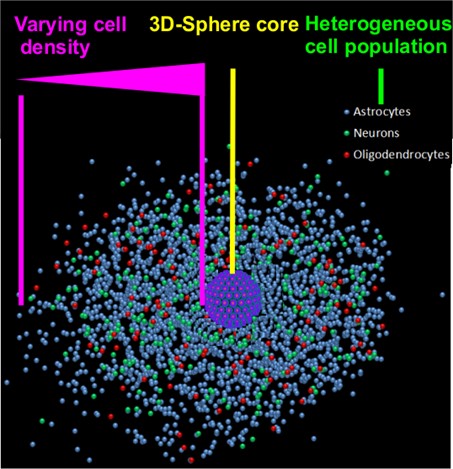 Figure 1: Challenges of the neurosphere assay: In the center of the image the 3D-neurospere core is represented as a purple spheroid. From this sphere core cells radially migrate out and differentiate into the three major brain cell types: Astrocytes, neurons and oligodendrocytes. HCA of such a system bears several challenges for automated evaluations, such as defocusing problems, due to the 3D sphere core, a variable cell density and a heterogeneous cell population.

However, these characteristic features open the possibility to analyze sphere-specific endpoints like radial migration distance and cell-type specific density distributions. 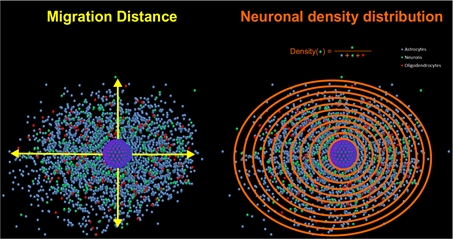 Figure 2: The radial migration distance is defined by the average distance between the rim of the sphere core and the furthest migrated cells (indicated as yellow arrows). A density distribution describes the ratio between a certain cell type e.g. neurons (indicated here as green dots) and all present cell types at a certain distance from the sphere-core (indicated as rings, which subdivided the migration area into ten areas with different distances from the sphere-core).

OBEN
We use cookies on our website to give you the most relevant experience by remembering your preferences and repeat visits. By clicking “Accept All”, you consent to the use of ALL the cookies. However, you may visit "Cookie Settings" to provide a controlled consent.
Cookie SettingsAccept All
Manage consent

This website uses cookies to improve your experience while you navigate through the website. Out of these, the cookies that are categorized as necessary are stored on your browser as they are essential for the working of basic functionalities of the website. We also use third-party cookies that help us analyze and understand how you use this website. These cookies will be stored in your browser only with your consent. You also have the option to opt-out of these cookies. But opting out of some of these cookies may affect your browsing experience.
Necessary immer aktiv
Necessary cookies are absolutely essential for the website to function properly. These cookies ensure basic functionalities and security features of the website, anonymously.
Functional
Functional cookies help to perform certain functionalities like sharing the content of the website on social media platforms, collect feedbacks, and other third-party features.
Performance
Performance cookies are used to understand and analyze the key performance indexes of the website which helps in delivering a better user experience for the visitors.
Analytics
Analytical cookies are used to understand how visitors interact with the website. These cookies help provide information on metrics the number of visitors, bounce rate, traffic source, etc.
Advertisement
Advertisement cookies are used to provide visitors with relevant ads and marketing campaigns. These cookies track visitors across websites and collect information to provide customized ads.
Others
Other uncategorized cookies are those that are being analyzed and have not been classified into a category as yet.
SPEICHERN & AKZEPTIEREN